George Whitfield and John Wesley are two of my dead influencers because of not only who they were, what they did, and books they wrote, but because of more importantly how they interacted.

What follows is Iain Murray’s description of the tension, friendship, and strained relationship these two men had.  It has taught me much, and it pray it does the same for you too:

The occasion and background of [Whitefield’s letter to Wesley] requires a few words of explanation. From the time of his conversion in 1735, Whitefield had been profoundly conscious of man’s entire depravity, his need of the new birth, and the fact that God can save and God alone. Describing an experience which occurred a few weeks after his conversion, he wrote: “About this time God was pleased to enlighten my soul, and bring me into the knowledge of His free grace . . .” Strengthened by his reading of the Scriptures, the Reformers and the Puritans, Whitefield gradually grasped the great related chain of truths revealed in the New Testament—the Father’s electing love, Christ’s substitutionary death on behalf of those whom the Father had given Him, and the Spirit’s infallible work in bringing to salvation those for whom it was appointed. These doctrines of “free grace” were the essential theology of his ministry from the very first and consequently the theology of the movement which began under his preaching in 1737. 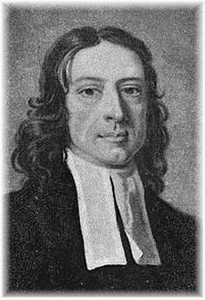 When Whitefield returned to England at the end of 1738, after his first visit to America, he found that the awakening in London had been furthered by the conversion and subsequent ministry of the Wesleys. Immediately they began to work together. Under Whitefield’s preaching the revival spread to Bristol and the West country in February and March 1739, and when he left that area at the beginning of April 1739, John Wesley was given the oversight of the work. But before three months had elapsed it began to be evident that there had not been the same doctrinal development in the Wesleys on all points mentioned above. The fact is that while John Wesley had at his conversion in May 1738 accepted evangelical views on sin, faith, and the re-birth, he had at the same time retained his pre-conversion opinions on the doctrines of predestination and the extent of the atonement. As the religious influences which had moulded Wesley prior to his conversion were High Anglican, it is not surprising that these opinions were Arminian and not orthodoxy.  His views on these points were not part of his new evangelical experience but arose, as Howell Harris declared to him, “from the prejudices of your education, your books, your companions, and the remains of your carnal reason.”

The first hint that this doctrinal difference might lead to serious results occurs in a letter of Whitefield’s to Wesley on June 25, 1739: “I hear, honoured sir, you are about to print a sermon on predestination. It shocks me to think of it; what will be the consequences but controversy? If people ask me my opinion, what shall I do? I have a critical part to act, God enable me to behave aright! Silence on both sides will be best. It is noised abroad already, that there is a division between you and me. Oh, my heart within me is grieved I . . . ”

On July 2, 1739, Whitefield wrote further to Wesley on this subject, terminating his letter with another appeal:

“Dear, honoured sir, if you have any regard for the peace of the church, keep in your sermon on predestination. But you have cast a lot.[5] Oh! my heart, in the midst of my body, is like melted wax. The Lord direct us all! . . . ”

On Whitefield’s departure from England in August 1739, Wesley immediately published this sermon. Entitled “Free Grace,” it professed to be founded upon Romans 8:32, and was printed as a 12 mo. pamphlet in 24 pages. Annexed to it was a hymn by Charles Wesley on Universal Redemption. It was this sermon which occasioned Whitefield’s reply here reprinted. But it is interesting to note that although Wesley’s sermon was published in August 1739, Whitefield’s reply is dated December 24, 1740, and was not published till early 1741. The reasons for this delay are probably as follows: (1) By the correspondence which passed between Whitefield and Wesley in 1740 it is evident that Whitefield longed to avoid an open breach and still hoped that his friend might be brought to a clearer understanding of the truth. Such sentences as the following are typical of Whitefield’s attitude: “How would the cause of our common Master suffer by our raising disputes about particular points of doctrines!” . . . “For Christ’s sake, let us not be divided amongst ourselves” . . . “Avoid all disputation. Do not oblige me to preach against you; I had rather die . . .” (2) It is evident that while on his second visit to America, Whitefield developed stronger views on the issues which this controversy involved. Before he left England in August 1739, he had been satisfied to counsel “silence” on these doctrines and they were not at that time conspicuous in his preaching. As late as March 1740, he wrote to Wesley: “Provoke me to it as much as you please, I intend not to enter the lists of controversy with you on the points wherein we differ . . .” But before the year had ended Whitefield went back on this decision, the reason apparently being that he had come to see the seriousness of these questions in a new light. He could thus remain silent no longer. On September 25, 1740, he wrote to Wesley: “What a fond conceit is it to cry up perfection, and yet cry down the doctrine of final perseverance. But this, and many other absurdities, you will run into, because you will not own election. . . . O that you would study the covenant of grace! . . . O that you would not be too rash and precipitant! If you go on thus, honoured sir, how can I concur with you? It is impossible. I must speak what I know. . . .” On February 1, 1741, he says; further:”I must preach the gospel of Christ, and that I cannot now do, without speaking of election. . . . ”

The reasons for Whitefield’s more decided attitude are not hard to find. Firstly he had, during 1740, made close friendships with such American evangelicals as the Tennents and Jonathan Edwards; through them he was doubtless led into a deeper understanding of Puritan theology and its relevance to evangelism and revivals. He also witnessed the outstanding blessing on their preaching. Secondly, as the year 1740 advanced, the reports that he received from his friends like [John] Cennick and Howell Harris made it increasingly obvious that harm and divisions were being wrought by the Wesleys’ insistence on their Arminian views. Wesley’s pamphlet “set the nation disputing.” As Harris wrote to Wesley: “You grieve God’s people by your opposition to electing love; and many poor souls believe your doctrine simply because you hold it.” A situation had developed in which it was imperative that Whitefield should declare his mind and do something to arrest the drift from evangelical orthodoxy.

The outcome of Whitefield’s return to England in March 1741 and the publication of his reply to Wesley, was an inevitable separation. Henceforth the evangelical forces engaged in the revival movement were divided, and a new party of Arminian evangelicals emerged for the first time in British church history. Due to the eminence of the Wesleys, this new form of evangelical faith has exerted a widespread influence even down to the present day. The contemporary strength of this influence can be judged from the manner in which George Whitefield, with his great predecessors the Reformers and Puritans, have been forgotten; indeed, it would not be too much to say that Whitefield’s views, as expressed in [his letter to Wesley], would appear to many to be quite alien to the evangelicalism that is commonly believed in today.

Some evangelical writers have sought to minimize the division between Whitefield and Wesley by referring to their “minor differences.” An impression is given that Whitefield abandoned the strong conviction he had about Arminianism in 1741; in proof of this we are referred to the fact that in 1742 their personal friendship was in measure resumed and that ultimately Wesley even preached Whitefield’s funeral sermon. But all this is misleading. The truth is that Whitefield rightly made a distinction between a difference in judgement and a difference in affection; it was in the former sense that he differed from the Wesleys, and that difference was such that, as Tyerman writes, it “led them to build separate chapels, form separate societies, and pursue, to the end of life, separate lines of action . . . the gulf between Wesley and Whitefield was immense.” But while their public cooperation was thus seriously disturbed, his personal affection for the Wesleys as Christians was preserved to the last. In this respect Whitefield teaches us a needful lesson. Doctrinal differences between believers should never lead to personal antagonism. Error must be opposed even when held by fellow members of Christ, but if that opposition cannot co-exist with a true love for all saints and a longing for their spiritual prosperity then it does not glorify God nor promote the edification of the Church.